My babies are officially considered full term as of today! While I am so happy to have made it this far, I am feeling so, so ready to meet my babies and not be pregnant anymore. I thought the last few weeks of being pregnant with Asher were difficult but I really had no idea. Carrying two full sized babies inside me is starting to feel almost unbearable.

My doctor has said that as long as everything continues to look good on my weekly NSTs, as well as with my blood pressure, she is willing to let me wait it out to go into labor on my own. Typically, doctors recommend induction (or even more commonly, c-sections) with twin pregnancies, especially once they hit about 38 weeks. I'm sure induction will be mentioned at my 38 week appointment but I'm still hopeful that my babies will come on their own time.

At 37 weeks, the babies are most likely around 6.5 pounds each and up to 22 inches long! Asher was 20.5 inches long when he was born, so I'm guessing they will be a similar length. Apparently, they are the size of honeydew melons so just picture having two of those shoved into your belly with no room to spare and that's about where I'm at.  I'm still waiting to feel the "lightening" that happens at the end of a singleton pregnancy, when the baby drops into the birth canal. Somehow I don't think this happens when you're pregnant with twins because I haven't dropped at all and can barely breathe due to the pressure on my lungs and constant kicking of my ribs.

As of my appointment last week, I was up 3 pounds from the week before. I'm at the point where I'm far more concerned about water retention than actual weight gain. I swelled up a lot after I delivered Asher, mostly I think because of the pitocin they gave me after Asher was born (which apparently is extremely common with twin births as well.) At this point, I'm expecting that I'm going to look like a human water balloon. Should make for some interesting photos. We actually have a photographer lined up to do a Fresh 48 session, meaning she will get some photos of the babies after their births, but while we are still in the hospital!

My stomach is so squished that eating anything kind of stinks. Plus everything gives me heartburn. I am having no cravings these days and instead am just daydreaming about what I'll eat once I feel relatively normal again. I was starving when I was breastfeeding Asher, so I can just imagine how I'll be feeling nursing two babies instead of one!

In the last few days, my body has been sending signals that I need to slow way, way down and take it even easier than I had been previously. I've been swelling up to the point where it's kind of scary and it hasn't been going down. Even just sitting up, rather than lying down, causes my feet, ankles, and legs to swell almost instantly.

I'm also just exhausted and feel way too tired to do any of my normal activities. Poor Asher has watched a Christmas movie two days in a row, which I feel guilty about but he is completely thrilled. I'm hoping this exhaustion is a sign of labor and that the babies will be making their grand entrance sometime in the near future.

I basically spend the night in a half awake/half asleep dream-like state. I stress about things at 3am that seem somewhat silly in the light of day, like worrying that I won't remember how to care for a newborn, or wondering how I will manage to take all three kids to the doctor at once.

Something to Be Happy About

We managed to go cut down our tree AND get our house decorated for Christmas this weekend. This is a relief because I was worried that if the babies arrived before we got our Christmas tree, it might not happen. Asher is so excited for Christmas this year and I think it's the first time that he really understands the holiday. We have read 'The Night Before Christmas" several times a week for the past month or so. He was so adorable decorating the Christmas tree with his special ornaments and so far hasn't messed with the tree much (fingers crossed that it stays that way.)

Asher also met Santa for the first time! It was so cute because despite his excitement of meeting Santa, he refused to sit on Santa's lap and clung to Josh's leg during the whole interaction. He did show Santa his stuffed Santa Claus that he brought from home with him. Later, he proudly told another little girl, "I talked to Santa!"

Here are some photos from our holiday themed family weekend... 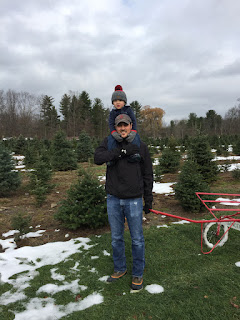 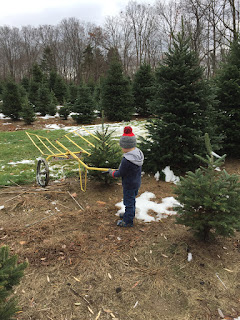 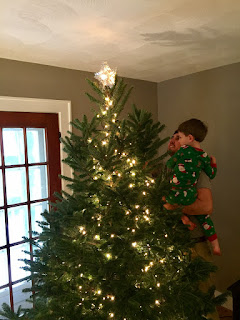 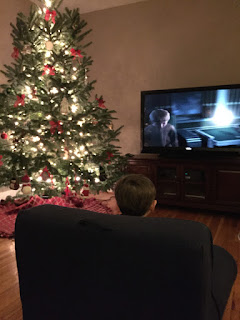 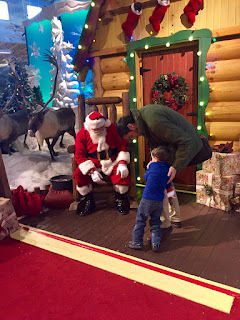 I can't stop thinking that no matter what, in just a few short weeks, my babies will be here! As rough as the end of this pregnancy has been, this is what has been keeping me going. Soon the discomforts of a twin pregnancy will be a distant memory and I'll be living life as the mama of three boys!
Posted by Unknown at 1:47 PM