Silas and Ezra were born December 8, 2016 when I was 38 weeks, 3 days pregnant. Silas Reid came first, at 2:43 pm weighing 7 pounds 5 ounces, 20 inches long. Ezra Jack arrived next at 2:59 pm, weighing 6 pounds 7 ounces, also 20 inches long. I will never forget the moment that I was finally able to hold my two babies on my chest after carrying them in my belly for what felt like an eternity. 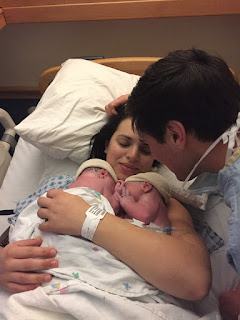 The end of my twin pregnancy was incredibly difficult due to intense heartburn, carpal tunnel, and swelling. My labor was long but I ended up with two big, healthy, squishy baby boys who got to go home less than 48 hours after delivery. I had the vaginal birth that I advocated for so long for with no complications. I feel so fortunate to have had such a positive twin birth experience and plan to go into my birth story in more detail in a separate post soon. 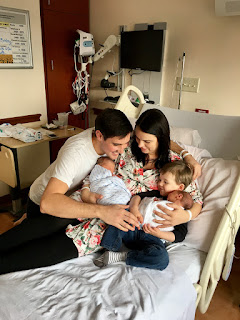 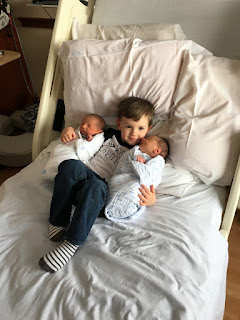 The early days had a steep learning curve. Even though we had been parents for a few years already, Josh and I had no idea how to raise twins. All of the literature and advice that we received suggested trying to get the twins on the same eating and sleeping schedule as early as possible but like most things in life, this was easier said than done. 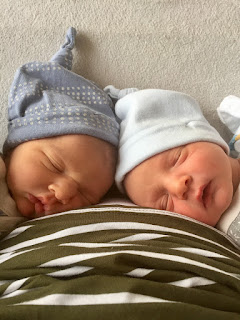 Despite having breastfed Asher for 20 months, tandem nursing is a completely different experience. Getting Silas and Ezra on the same schedule meant when one showed hunger signs, both babies nursed. Due to significant weight loss in the days following delivery, I woke them up every two hours around the clock for the first month. I experienced a lot of pain and developed mastitis, both of which made me question whether I would really be able to exclusively breastfeed twins. At about a month old, we took a trip to Albany to have both boys' tongue and lip ties corrected by a renowned pediatric dentist. From this point on, breastfeeding got much easier. We eventually found our groove as the boys now nurse like champs and I am so thankful that I didn't give up.

The twins both had their days/nights confused initially, so first few nights home from the hospital were sleepless for all of us. We pulled out some of the tricks we learned the first time around and developed a bedtime routine. We quickly scrapped the idea of having Silas and Ezra sleep in the twin pack and play we had purchased and let them sleep in rock and plays. We swaddled them, kept the sleep environment dark and used white noise to help them stay asleep. When I woke them to nurse, we kept the room quiet and dark except for a nightlight. It only took a few days for the boys to be on a better sleep schedule and by a little over a month old, they were doing four hour stretches in the night. 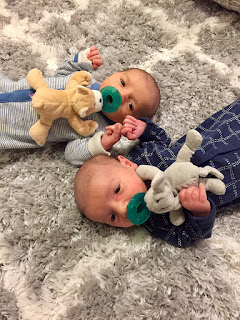 Honestly, looking back, the first few weeks are a blur. It was a big adjustment to go from a family of three to a family of five. Asher accepted his new role with some initial apprehension and uncertainty, but eventually embraced it and is the sweetest, most loving big brother to Silas and Ezra. Josh and I dove back into being the parents of newborns and remembered how difficult it can be to function on little to no sleep, just this time with a toddler in the mix and two babies instead of one. Having twins means twice as many diaper changes and twice as much crying, but also two times the snuggling and love to go around. 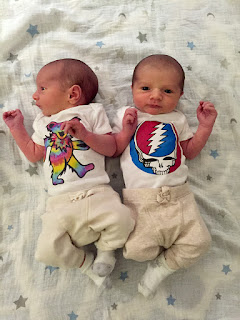 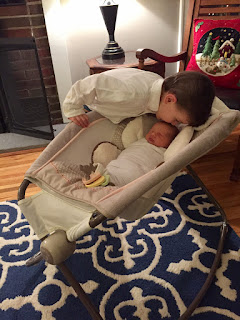 We unfortunately dealt with some unexpected challenges in our first month home with the twins. Both boys had high jaundice levels though Ezra's were higher, and we ended up having to treat at home with a biliblanket for over a week. Ezra had to be on the blanket 24 hours a day, which meant he was stationary because it was plugged into the wall with a relatively short cord. Because of this, I couldn't do any babywearing or skin to skin with him. While we anticipated spending our first few weeks cuddling the twins and easing into our new life, we instead spent our time going to the hospital and pediatrician's office daily for blood tests and weight checks.

Just when we thought we were in the clear, we woke up in the middle of the night to change and feed the boys and Josh noticed that Ezra seemed really warm. Upon taking his temperature, we discovered that he had a fever of 101.7. Fevers over 100.4 in babies up to 3 months old warrant a call to the doctor. We were instructed to take Ezra to the emergency room at the children's hospital, so we packed up the whole family, dropped Asher at grandma's house, and headed straight there. 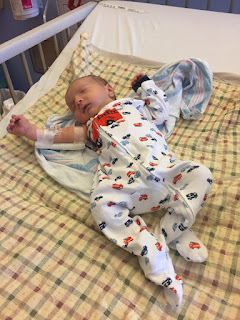 Ezra was subsequently hospitalized for several days with what ended up being a common virus. Because of his immature immune system, Ezra couldn't fight off the virus in the same way that even an older child could. It was heartbreakingly sad to see our little peanut hooked up to all the machines in his hospital room. We were immensely relieved when we were finally home from the hospital and reunited as a family of five.

Despite all of the up and downs in our first month home, Josh and I just feel so lucky to be the parents of our three beautiful boys. It's amazing to see how much they love each other already. 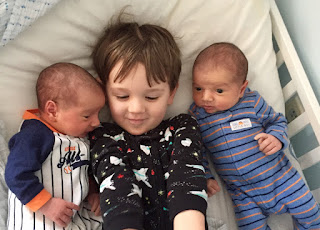