Silas and Ezra are now two months old. I've always heard that times goes faster the second time around and with twins, I think this is even truer. Somehow, all of a sudden, they aren't newborns anymore. Their faces are filling out with chubbier cheeks and their thighs are developing squishy rolls. They seem sturdier, more alert and aware of the world around them. They can hold their little heads up for longer periods of time and their individual personalities are starting to shine through. While Silas demands that his presence be known, Ezra is more easy going. 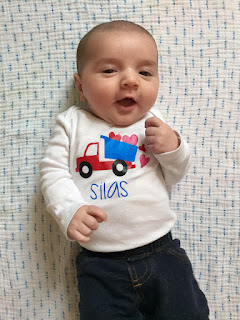 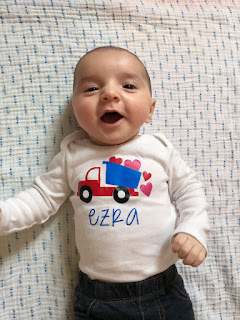 Both boys started rolling from belly to back at a few weeks old. I couldn't believe it! It's still pretty infrequent but Ezra does it more often than Silas.

They have also started smiling socially and it just melts my heart every time. Along with those sweet smiles, they are beginning to coo in response to us. 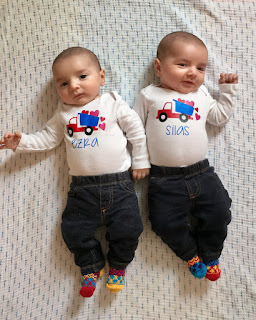 The last month has been a rocky road in terms of health. It seems like we are constantly at the pediatrician's office for one thing or another. At about six weeks old, both babies came down with a virus consisting of coughing, running noses, and low grade fevers. They had all the symptoms of RSV, but tested negative for it. Silas' cough lasted for weeks and was really worrying us. He ended up needing an antibiotic as it developed into a secondary infection in his chest.

Unforunately, at a few weeks old, Ezra was diagnosed with a lacrimal cyst, which is basically a lump in his tear duct area. While it is common for babies to have clogged tear ducts, cysts such as these are extremely rare. We were referred to a specialist who told us that Ezra would most likely need a minor surgery to probe the area but he scheduled it a few weeks out to see if it would start to get better on its own.

About a week before Ezra's scheduled surgery, I noticed his cyst was looking red and inflamed. I was having a hard time clearing it as the doctor had taught me to do, so I sent a photo of his eye to our pediatrician because I was worried it might be infected. After consulting with the ophthalmologist, our pediatrician told me to take Ezra to the emergency room. He ended up needing emergency surgery in his eye due to a rapidly developing infection. Later test results showed an uncommon and dangerous bacteria that caused us to stay two nights in the hospital while doctors from Infectious Disease worked to determine the right kind of antibiotic for my little peanut.

Ezra responded well to the antibiotics and his eye cleared up before we even left the hospital. The cyst had been causing tightness on the entire left side of his face, so it was really incredible to see his whole look change as he healed. I'm happy to say both boys are healthy and thriving now. We are crossing our fingers that there are no other health issues in our near future. 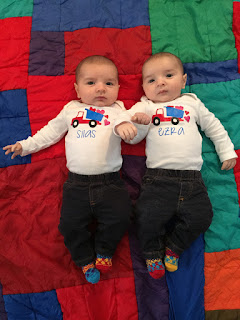 Surprisingly, Silas and Ezra are great sleepers. This is something I worried about endlessly in the months leading up to their births. Ever since I got the all clear to stop waking them every few hours at night to nurse, they have been doing longer and longer stretches. At two months old they have a long nursing session at about 6:30/7pm and then sleep until 4/4:30am most nights. Then they go back to sleep until 7am most days.

These two could teach big brother Asher a thing or two about sleeping; he STILL doesn't sleep through the night. We inevitably end up with Asher in our bed every morning. I know the four month sleep regression is looming and don't even get me started on teething. I'm just trying to appreciate these restful nights while I can.

Naps are another story and something I am still figuring out with twins and a toddler. Because they have no real nursing routine, they haven't fallen into any sort of predictable napping schedule yet either. They usually nap at the same time, but not always. Sometimes one will nap in the swing and the other in the baby carrier. Sometimes both snooze in the Weego or their car seats while we are out and about.

I started stressing about getting them on a good nap schedule but I'm realizing lately that it's just different this time around. As the second and third children, Ezra and Silas are sort of required to be more flexible by default. They sleep great at night and are happy babies so I'm trying not to worry about it too much right now.

Ever since they had their tongue and lip ties corrected, Silas and Ezra have been nursing like champs. I nurse them on demand and they have no real schedule. It's funny because Asher ate every two hours on the dot for almost a year. Maybe it's because I'm tandem nursing and just following their cues more, but they range from eating every hour to sometimes giving me four hour stretches if they take a good afternoon nap.

They took their first bottles at 8 weeks old. I was nervous because we waited so long but I wanted to be sure their latches had improved and they were nursing well before bringing a bottle into the mix. Luckily they took the bottles fine and Josh really enjoys the bonding time. They lock eyes with him when he feeds them and it just melts my heart. 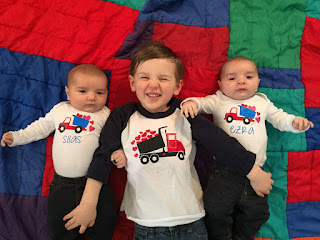 Asher loves his brothers (or bruvers, as he likes to say.) He is gentle with Silas and Ezra and so patient with his mama during the seemingly endless tandem nursing sessions. He loves doing tummy time with his brothers and lying on the play mat showing them the various toys. He often asks to hold them and tells me how much he loves them.

Asher tries to comfort Silas and Ezra when they cry, offering them kisses or stuffed animals. He is always telling me, "They need their milkies," and, "They want you to wear them." He loves to help with diaper changes and bath time and really is the best big brother. 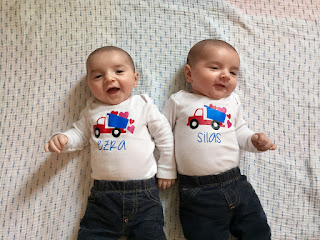 Even though it's often chaotic having three children under three years old, I'm trying as hard as I can to breathe in the smell of the babies after their baths, to take mental pictures of the way they smile up at me while they are nursing, and not to take for granted how it feels to have them fall asleep in my arms. I know that before I know it, my babies will be toddlers and my toddler will be a preschooler, and I will be missing this crazy, challenging, but oh-so-worth-it time of my life.