My doctor keeps telling me my minimum goal is 34 weeks, so I'm pretty happy that I'm almost there! I'm now having weekly doctor's appointments with non-stress tests and am still having monthly sonograms as well. The NSTs have been going pretty well. Because of the positioning of the babies and the fact that they are both boys, it's sometimes hard for them to distinguish between the two heartbeats but overall everything has looked great with the babies so far.

This week, my doctor also noted that I was having contractions during my NST, which I wasn't too surprised to hear. Lately I have been having contractions that are more intense than Braxton Hicks but still pretty mild in general. They have still been irregular and not very painful, so my doctor didn't seem overly concerned. 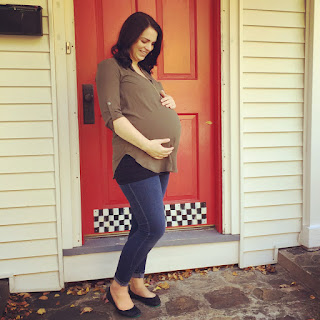 The babies are estimated to be about the size of honeydew melons this week, at approximately 19 inches long and 4.5 pounds each. My apps informed me that over the next four weeks, the babies will each put on another half a pound per week. This is great news because the bigger the babies are, the better chance they will have at being healthy and avoiding NICU time. But my belly feels so tight and stretched to the limit already, so I really can't imagine how it's going to feel as they get bigger and bigger.

I gained two pounds last week, which puts my total weight gain at 36 pounds. I'm inching closer and closer to the weight I was at when I had Asher. The nurses keep reassuring me that I have two babies in there and I will simply gain more weight this time. Still, I wish they just wrote down the number and I didn't have to see it every week, yikes!

I'm retaining a lot of water these days. My legs and feet feel incredibly swollen by the end of the day each day, especially if I am on my feet a lot. I've been nervous about pre-eclampsia but my blood pressure continues to look good, so hopefully it's just water retention.

My heartburn has been so bad that it makes me not want to eat dinner. Even with taking Zantac and Tums, I'm miserable by the end of the day. For a while it seemed like acidic foods like tomato sauce or spicy meals were the triggers, but lately I feel like everything is giving me heartburn no matter what.

New cravings this week include Halloween candy (of course) and homemade macaroni and cheese.

I pretty much just feel like I'm eight months pregnant with twins. For a while this pregnancy felt no different, if not easier, than my pregnancy with Asher. Now, I can't even go trick or treating with my son because I am having too many contractions after walking a block and a half. My belly is huge, which makes everything more difficult, plus I'm completely exhausted. I feel bad for poor Asher, who will come up to me when I am resting on the couch and sweetly ask me, "Mama not feeling well?"

Sleep is overrated, right? I get up every few hours no matter what and have difficulty getting comfortable. I've also been woken up by cramping and contractions several times this week. 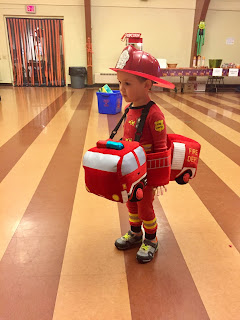 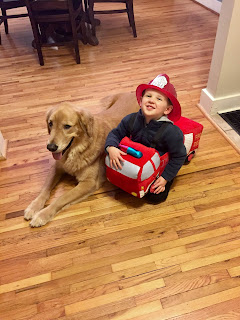 He also adored carving pumpkins with Josh and was especially interested in removing the pumpkin guts by hand. 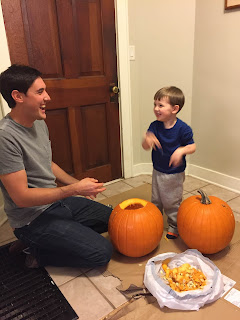 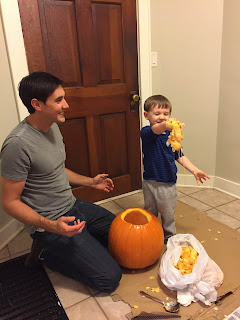 I am really looking being able to put on my own shoes again in the near future. And just fit into my shoes in general. I hit an all-time low this week when I couldn't even get my Toms on my fat feet. Josh lovingly referred to my pinky toes as Vienna sausages today. I'm pretty sure I'm going to be that pregnant woman wearing flip flops in December in upstate New York.
Posted by Unknown at 5:55 PM