Wow, 32 weeks; entering my 8th month of pregnancy! It's starting to feel real that we are going to have two babies soon, and also a little scary. Asher is so far from a newborn that it's hard to remember everything from that stage. I'm sure it will all come back once they are here.

We are starting to refer to the babies by their names, which makes everything seem more real. We are saving the surprise for everyone else once the babies are born, but it's so darn adorable listening to Asher whisper the babies names into my belly. 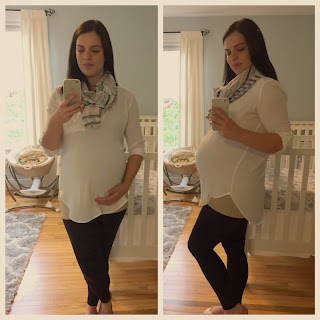 Most of the apps this week compare the babies to obscure fruits and vegetables that I can't quite picture (jicama anyone?) As of my appointment a week ago, the babies were measuring at about 4 pounds each. Everything looked good in my ultrasound last week and there was only a 2% size difference between the babies, which is great! At my appointment this week, I will start having non-stress tests, which consists of hooking me up to fetal monitors that track the babies heart rates, as well as any contractions that I have, over a period of time.

As of my appointment last week, I had gained 3 pounds, which puts me at 34 pounds gained total. I'm still feeling pretty swollen these days, particularly in my legs and feet, so I'm trying to drink a lot of water.

Overall, I'm not feeling as ravenous as I thought I would being 8 months pregnant with twins. I'm still really craving apples and peanut butter, as well as lime flavored Greek yogurt. Mostly I just want a turkey sub from Wegmans, but I have been staying away from deli meat as is usually recommended during pregnancy. This is definitely the first thing I want to eat after having the babies.

My belly is so incredibly heavy. If the ultrasound technician is correct in her estimations, I am carrying around as much, if not more, baby than I was when I gave birth to Asher. So, from here on out it really is uncharted territory. I'm having a lot of the aches and pains that I had at the very end of my last pregnancy. It's hard to imagine how I'll be feeling if I'm still pregnant in six weeks!

We bought our minivan this weekend and Asher thinks it's the coolest thing ever. We went to a family party over the weekend and the first thing that Asher told everyone upon arriving was, "I have a minivan!" I'm just relieved that it's one less thing I have to worry about when the babies arrive; I can now officially fit all three carseats in my car at once. 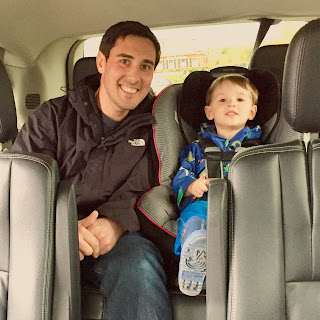 Last weekend ended up being a bust in terms of completing our final preparations for the babies due to a flooded basement. So this weekend I am looking forward to doing that, along with attending Asher's playgroup's Halloween fundraiser on Saturday. Is there anything cuter than a bunch of babies, toddlers, and preschoolers wearing costumes? I think not.
Posted by Unknown at 5:23 PM