I'm 29 weeks pregnant and I swear it's starting to feel like each week goes faster than the last. After a lot of research and polling moms in the multiples group that I joined, 32 weeks has long been my goal to have everything "done" when it comes to the babies. As this date approaches fast, I'm starting to get very nervous that this won't actually happen. I'll even go as far to say that I'm pretty sure it won't all be completed by this date. I have an ongoing list of baby to do items that I feel like we make progress on but there never seems to be enough time. I just keep trying to tell myself that it will all get done eventually and the twins are going to stay put for at least 9 more weeks... 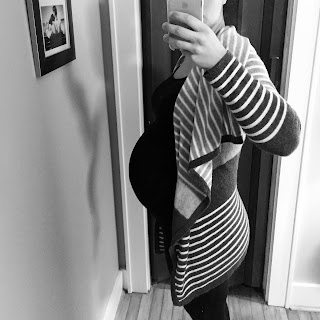 According to my apps, the babies are now approximately 17 inches long and 2.9 pounds each. Asher was 20.5 inches long at birth, so it's crazy to me that they are almost as long as they will be when they are born. They will still more than double in weight over the next 9+/- weeks. (Asher was 8 pounds 5 ounces!) Everyone always talks about how twins are smaller but my doctor told me that's just because twins often come early. I'm mentally preparing myself for two more big babies; they are measuring ahead after all!

I've reached the point in my pregnancy where I'm regretting this section of my weekly blog posts. Seriously though, stepping on a scale is outright depressing when you are having ONE baby, let alone two. I have a feeling that the number on the scale will reflect some water retention this week. I've been feeling swollen every day, pretty much everywhere but especially my legs and feet.

My appetite is back, which is good. I'm still trying to focus on eating as healthy as possible and cooking at home but I have to admit I'm getting tired. Sometimes cooking and cleaning up just seems like such a huge effort. I'm still keeping up with it, but I'm wondering how long I'll actually be able to do it. I currently have 17 meals stocked in the deep freezer and I've already found myself considering using them when I'm exhausted. It's better than ordering pizza (again) right? The frozen meals are supposed to be for when the babies get here, so I'm hoping I'll be able to make it through the next two months without using them. We'll see!

It's funny how true the second semester energy versus third trimester exhaustion theories have been so true for me in both of my pregnancies. I more or less felt great right up until about 28 weeks and then I hit a wall. This weekend, we were in the car on the way to AppleFest in Ithaca and I was feeling so terrible that we decided to just come home instead. Josh kept Asher occupied all afternoon so I could take a nap on the couch. Not very exciting, but I'm learning that especially with a twin pregnancy, it's important to listen to my body.

I feel so incredibly fortunate to be able have the experience growing not one, but two babies. But that being said, I feel enormous. My back hurts. My feet hurt. I'm just ready to be able to tie my shoes and pick up my two year old. I am really looking forward to holding my babies in my arms and feeling like myself again.

I still can't decide if my trouble sleeping is pregnancy related or due to Asher's difficulty sleeping. Multiple times this week, I've spent hours in the middle of the night lying on Asher's bedroom floor rubbing his chest or back so he will go back to sleep. The poor kid has a cough again and his molars still are cutting through, so he's not sleeping for more than a few hours without waking. This means, of course, that Josh and I aren't getting much sleep either.

The first few times he went to school, Asher was absolutely fine with it. But in the second week, he decided that he would rather be at home with his mama and daddy. While we are still dealing with some separation anxiety issues with Asher, I think he's finally starting to make a little bit of progress. He didn't cry or seem anxious during breakfast this week and was happy that he got to bring his favorite stuffed bunny, Hoppity, to school with him. When Josh and I dropped him off in his classroom, he did cry a bit, but his teacher told me later that he calmed down much faster than he had previously. When I picked him up, he told me he didn't want to go home because he wanted to play more! I'm hoping it continues to get easier for him and that he starts to enjoy school more and more as time goes on. 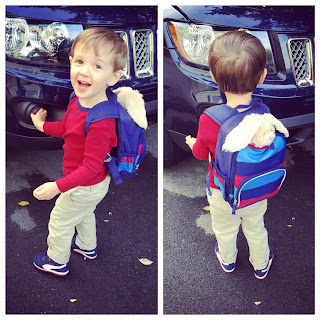 This weekend, Josh and I are going to an event for International Babywearing Week and hopefully will learn some tandem wrapping skills! I loved babywearing Asher, pretty much up until my doctor told me I had to stop carrying him during this pregnancy. It became a lot more infrequent over time but when Asher was a baby, we had many days where babywearing was the only way to calm him. I am so looking forward to learning to tandem wear the twins.
Posted by Unknown at 11:52 AM