This is my last week of my second trimester, which is both exciting and terrifying at the same time. I know this is probably a normal feeling, but sometimes I feel sad that my time with just Asher is coming to a close. It feels like the end of a big chapter of my life! I have loved staying home with Asher and being here for all of the nap time stories, snuggles, and big hugs. I love watching Asher grow more everyday. It is strange knowing that our weekdays will no longer just be the two of us when the twins are born. I know Asher is going to be an amazing big brother but I can't help but feel emotional about all of the changes to come. 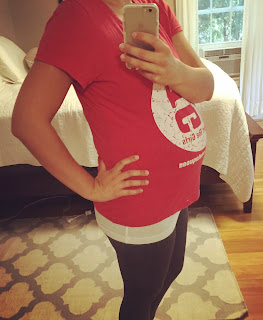 The babies are now approximately 15 inches long and over 2.2 pounds each! My various pregnancy apps compare the babies this week to acorn squash, cauliflower, or a bunch of bananas. The babies are currently swallowing amniotic fluid as practice for breathing on the outside, which is pretty cool to think about!

I'm feeling quite a bit of movement all day, but it's hard or me to distinguish between the babies still. I get an ultrasound on Thursday, my first in over a month, and I'm really looking forward to understanding more about their positioning. At times my belly looks really funny because of the two babies in there. It will be visibly lumpy and when I feel around, I can feel larger baby body parts like their heads or bums.

I won't know until Thursday, but I don't think I'm having any issues gaining weight. I just want to be sure I'm not retaining too much water. I haven't felt too swollen so far this week but it really depends on my activity level and the temperature outside. I mean, why is it still 80 degrees in September?! I am really ready for some cooler fall weather.

I think my biggest craving lately is grapes. Last week alone, I went through two of the containers of the organic red and green grapes from Wegmans. I did have a little help from Asher but I really couldn't get enough of them! I haven't noticed any other major cravings, though I did come home from the grocery store with some very random purchases today that were definitely not on the grocery list, which I usually stick to pretty closely so I can save time. (Apparently I really needed lime flavored greek yogurt and sea salt dark chocolate caramels too!)

I am still cooking up a storm lately, which makes me very happy as I see my deep freezer filling up with meals as the weeks go by. Last week, I visited a friend who just had a new baby and made two batches of Skinny Banana Chocolate Chip Muffins. There was no way Josh and Asher would let me get away with only making them for someone else!

I'm still feeling pretty well overall but carrying Asher is becoming difficult for me. I'm not really supposed to be picking him up but there are times when it's hard for me to avoid. Earlier this week, he fell asleep on the way home from the grocery store - a four minute drive - and completely refused to wake up to come inside. I carried him up to his bedroom, but I struggled quite a bit getting up the stairs. Afterward my stomach was as hard as a rock thanks to Braxton Hicks contractions, which start up instantly when I do anything physically demanding. I think it's time to admit my limitations now that my third trimester is looming.

My heartburn has been a bit better this week and my SPD has still not returned. I feel tired and heavy but also surprised at how well I'm still getting around! My gestational diabetes test will occur at my appointment this week. I'm a little nervous because GD is more common with twin/multiple pregnancies and can cause health problems for both mom and babies.

Sleep has been challenging this week but not because of my pregnancy. Asher has been sleeping terribly I think in part due to all of the changes he has been experiencing lately. He recently started up with school two days a week, plus Moms and Kids on Wednesdays, and on top of that, he has also not been feeling very well. Several nights last week he didn't fall asleep until hours after his normal bedtime. It's been rough! Hopefully he starts sleeping well again soon.

I started my childbirth refresher class this week. I say "I" and not "we" because Josh was in Connecticut so unfortunately, I had to go alone. Despite being awkward and a bit lonely because I was partner-less, it was so nice to spend time thinking about the babies and their impending birth. I especially enjoyed the final portion of the class concentrating on relaxation, breathing, and visualization. It was so calming to be able to spend time focusing on the twins without any outside distractions. It made me realize that I need to take time to do this as often as I can.

Next week, the childbirth class will continue, as well as a multiples class at the hospital. I'm so interested to find out what this class will entail. I'm also looking forward to meeting some other local moms who are pregnant with twins!
Posted by Unknown at 7:27 AM