All of a sudden I feel SUPER pregnant. When I drop something on the floor, I evaluate how important it is that I actually pick it up. Sometimes I will try to talk Asher into picking it up for me (usually unsuccessfully.) They say with twins you are about two months ahead belly-wise so I'm looking at least 34 weeks pregnant. Needless to say, strangers are perfectly comfortable asking me when I'm due and what I'm having. People offer to help me put my groceries in my car or wait to hold doors for me. My belly button totally protruding (something that never happened in my last pregnancy) and somehow I'm supposed to cook these babies for at least another 12 weeks?! 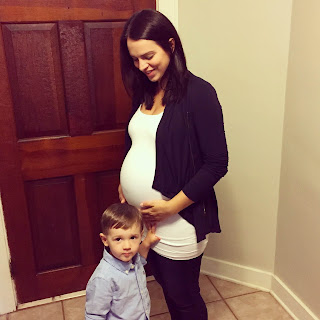 According to my handy dandy pregnancy tracker apps, the babies are now about 14 inches long and 2 pounds, each about the size of a butternut squash. An interesting fact for this week is the babies can likely detect light and dark and hear noises like Josh's voice. One of the warnings on the app this week is to watch for preeclampsia, something I am a lot more worried about with a twin pregnancy than I was when I was pregnant with Asher. Apparently preeclampsia is more common with twin/multiple pregnancies and includes a rise in blood pressure, protein in your urine, and rapid weight gain (fluid retention.) Preeclampsia can lead to various issues including prematurely born babies, which is what worries me the most. I wish I could stop worrying about so many things but having two babies in there makes me even more anxious!

I'm feeling movement all the time, but especially in the afternoons and evenings. This is probably due to the fact that I'm much busier during the day. I can't really tell the positioning of the babies, despite how hard I try. Sometimes I feel kicks up near my ribs, in the middle of my belly, or even way down low below my belly button. I didn't get an ultrasound last week, so I'll know more about their positioning after my appointment next week.

I almost had a heart attack when I saw that I had gained six pounds since my last doctor's visit. I mentioned in my previous post that I was worried I have been retaining water because I have been swelling at times (especially on hot days or during long car rides or periods of sitting down.) When my doctor came in to see me, I immediately started asking questions about my weight gain. Should I be worried? I mean, there is no way I'm eating enough to account for that much weight gain!

My doctor assured me that especially with twin pregnancies, there are some visits where a higher weight gain will be recorded, usually because the babies went through a little growth spurt. She said we are going to keep a very close eye on my blood pressure and water retention, as well as future weight gain patterns, to make sure it's not something else going on. I have to admit I was pretty worried after this appointment, but I'm trying to just focus on eating healthy and getting enough water for now.


Eating
One thing I have been trying to do this entire pregnancy is start my day with a nutritious breakfast. Usually it is oatmeal with blueberries but sometimes I'll make an almond milk smoothie or avocado toast topped with egg whites.

I've still been making a lot of dinners (and freezing many extras too!) Last week I made - and also froze - eggplant parmesan with homemade marinara and Skinnytaste's Crock Pot Santa Fe Chicken. I also whipped up a few batches of homemade spinach basil walnut pesto for the freezer because our basil plants are getting huge. I hope I still continue to have the energy to cook in the weeks to come but for now I'm taking it day by day.

Most days, I'm feeling exhausted by late afternoon and my back is starting to hurt by the end of the day, which is not surprising considering how big the babies are getting. I'm still functioning okay for the most part though, so overall, I don't have too much to complain about. I feel a lot better than I thought I would at 26 weeks pregnant with twins! No major aches or pains, my SPD has not returned yet, and I'm still (mostly) keeping up with Asher.

I am still sleeping fine, thankfully! Rolling over from side to side is starting to get extremely difficult but that's about it. I feel really lucky considering at this point in my last pregnancy, I had terrible insomnia and was only sleeping a few hours every night.

Asher started his two year old program at the local Y this week and it was just so adorable seeing him making new friends. I was a little emotional at drop off, I mean wasn't he just born yesterday?! How is he old enough to go to school? A lot of the other children were crying when their parents left but Asher went over to the shelf and happily began playing with trucks. He didn't even really notice when Josh and I reluctantly left. What a big boy!

Here are some photos from his first day: 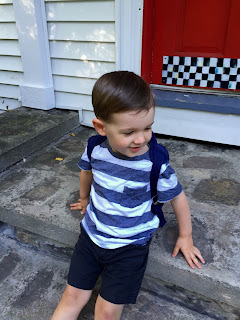 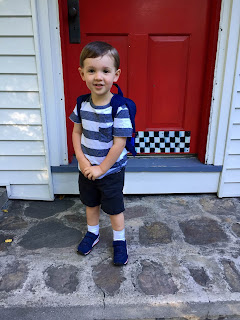 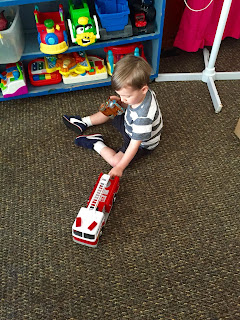 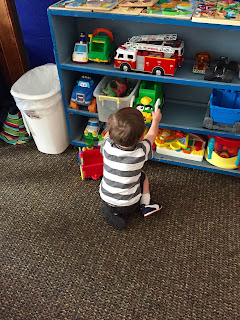 We finally started doing some set up in the babies' room over the weekend. We now have two cribs, a changing table, side table, bookshelf, and two lamps. It's definitely getting there! I ordered a bunch of things off our registry, including crib mattresses and baby bedding. I can't wait until it arrives! It definitely makes the twins' impending arrival seem even more real. Asher has also been happily referring to his old room as the baby room which is such a relief! I will put up photos of the nursery as we make more progress in the space.
Posted by Unknown at 10:42 AM