I am six months pregnant as of Monday of this week and I really can't believe it. Wasn't I just finding out I was pregnant? All of a sudden, I'm experiencing moments of sheer panic. Our house isn't ready to bring two babies home... We have so much left to do in the nursery... Our current cars can't even fit three car seats... My anxious thoughts go on and on. Something about having twins makes me feel like I need to prepare absolutely everything way ahead of time.

I find myself having weird bouts of energy where I will clean the entire house in one evening or make multiple freezer meals in just a few hours. I guess I'm officially in nesting mode. I'm either feeling completely exhausted or I'm in hyperdrive, and there's really nothing in between right now. It must be kind of funny for Josh to observe. 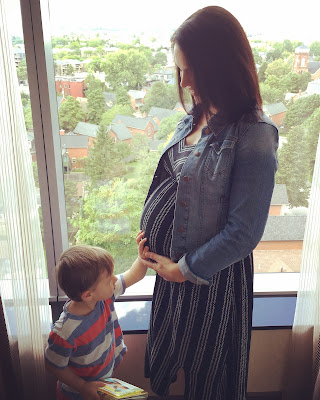 It feels really great to know I made it to the first viability milestone in my pregnancy that I mentioned in my last post. At my doctor's appointment last week, everything looked great. Baby A was estimated to be around 1 lb., 6 oz., and Baby B was roughly 1 lb., 5 oz. I was relieved when my doctor informed me that the size difference between the two is much smaller than in my previous ultrasound and isn't a concern anymore. Both babies are right around the 50th percentile for height and weight, which is great news!

According to my baby growth tracker apps, the babies are about the size of eggplants. No wonder my belly feels so huge already! Their faces are completely formed and they are developing hair. It also says they are gaining approximately six ounces per week each! No wonder the scale changes so much from appointment to appointment.

At my last appointment, I was up another 3 pounds, making my total weight gain 18 pounds as of about 23.5 weeks pregnant. My doctor initially told me my goal for twins should be around 45 pounds, so this number seems pretty good to me. The multiples book that I've been reading, When You're Expecting Twins, Triplets, and Quads - Proven Guidelines for a Healthy Pregnancy, has given me many pointers about how to gain weight in a healthy manner during a multiples pregnancy. I highly recommend this book if you're pregnant with two or more babies!

I don't really think I've had any new cravings this week or even been especially hungry. I'm still really into oatmeal for breakfast and have been eating it every day. I like mine with blueberries, almond milk, cinnamon, a little natural peanut butter and a pinch of brown sugar. I set a goal to eat more fruits and vegetables in general and drink more water.

I mentioned this previously but I'm so incredibly tired. Way more exhausted than I ever felt when I was pregnant with Asher. I am sure having a two year old contributes to this but I never realized how physically draining a twin pregnancy could be. I find myself needing to lie down after active periods and needing to go to bed extremely early these days.

My SPD (Symphysis Pubis Dysfunction) is back and I had forgotten just how painful it was during my last pregnancy. It developed about halfway through my third trimester when I was pregnant with Asher, but it was far more manageable. I was able to rest often because I was on summer break from teaching and also didn't have a child to chase after. This time, it's more severe and came on way earlier in my pregnancy. I remember my doctor warning me that this could be the case in subsequent pregnancies but I hadn't even thought about it until I woke up one morning last week with a sharp pain radiating through my pelvic bone. It makes it difficult to put on pants, walk up/down stairs, pick up anything remotely heavy, walk long distances, stand for long periods of time, even sit or lie in certain positions. I plan to discuss options with my doctor this week, as some moms in my multiples group mentioned physical therapy as a coping strategy.

Asher is continuing to sleep soundly in his new bedroom which means that Josh and I have been getting 8+ hours of uninterrupted sleep every night. Well, uninterrupted by toddlers, as I'm still unable to make it more than a few hours without a trip to the bathroom. I'm still sleeping really well, despite my strange and vivid pregnancy dreams which continue every night. A few nights, I've had a hard time falling asleep because I'm thinking about everything we still need to do before the babies get here. But I suppose that's to be expected at this point!

The one benefit of my nesting is that I am busy at work filling our deep freezer with meals for when the babies get here. (I'm using Pinterest to find recipes for freezer and crock pot meals.) Last pregnancy, I had the foresight to freeze about two weeks worth of meals and it was a godsend when we were deliriously exhausted from taking care of our newborn. With two babies on the way and one rambunctious toddler, I know this time I will need to do even more prep because I will have even less time to cook in those early days. In the last week, I have made four meals to go in the deep freezer! I'm hoping to have an entire month's worth of meals frozen by the time the babies arrive. I'm not sure if this will happen but I'm going to keep up with the cooking as long as I have the energy.

We are taking a family trip this week to Buffalo with Josh! Josh is going for work and has been asking forever if Asher and I can tag along on one of his trips. I've read that it's not recommended for women pregnant with twins to travel much in their third trimester, so I thought we should go while we are able and I'm still feeling well! Josh will be busy on Thursday and Friday with business meetings but Asher and I will be able to swim in the hotel pool, take long walks in the stroller, and hopefully find some local parks or playgrounds to explore. This will probably be our last trip we take as a family of three, so I want to try to make it special for Asher. On Friday afternoon, we plan to take Asher to Niagara Falls for the first time. On Saturday, we are making a trip to Canada to go to IKEA and a town called Niagara on the Lake. I am looking forward to a few days away!
Posted by Unknown at 11:46 AM