I wish I'd done this a while ago, but I'm finally making it a priority to write about my pregnancy. During my first pregnancy, there was so much time to focus on the little life growing inside me. I always knew exactly how many weeks pregnant I was, approximately how big the baby was, and which fruit or vegetable he resembled each week.

With my second pregnancy, I'm so busy chasing after Asher that sometimes I forget to acknowledge that I hit a new week of pregnancy, let alone which produce these babies are supposed to resemble. I'm hoping that this blog allows me to take time each week dedicated to thinking about the changes occurring in my body as the babies grow and I get closer to holding them in my arms. The second half of pregnancy goes so fast and especially with this potentially being my last pregnancy, I want to document the experience. 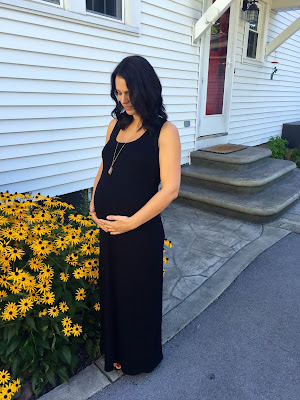 According to my handy baby growth app, my baby boys are now measuring in at over 11 inches and 1 pound each! I'm so eager to hit the 24 week mark next Monday when the babies are considered "viable" and would receive life-saving treatment if they are born early.

I'm feeling movement all the time, especially when lie down. I've read that a lot of twin mamas can tell which baby they are feeling but I honestly have no idea. I'm hoping that after tomorrow's ultrasound I will have more of an idea of where they are. Sometimes I think I feel kicks up high near my ribs. Other times, I feel movement way down low. They are still so small that they can change position often so it's hard to distinguish whether I'm feeling an arm or a leg, let alone which baby!

As of my last appointment at 21 weeks, I was up 15 pounds from my pre-pregnancy weight. I don't weigh myself between appointments because I already feel like I step on the scale way more often than I'd like. I do feel like my belly is growing pretty rapidly these days! My maternity dresses are all I fit in now and I'm starting to stress about what I'll wear with fall around the corner. Last pregnancy I was in Florida and never even had to purchase maternity jeans.

I feel like I am hungry and thirsty all the time. For the most part, I try to eat healthy but I definitely let myself indulge if I'm having a craving. Cooking at home helps me focus on getting balanced meals; this week's dinner menu includes Skinnytaste's Cheeseburger Casserole and Gimme Some Oven's Chicken Alfredo Baked Ziti. I've also been loving using all the organic veggies my parents sent me home with from their garden in Vermont. Random cravings this week have included: ice cream, all the pasta, eggplant parmesan, and oatmeal.

I am really starting to slow down and realize my limits with my twin pregnancy. I feel exhausted all the time. I think I have officially gotten past the honeymoon phase of pregnancy and am just feeling heavier every day. I'm also having a lot of Braxton Hicks contractions, especially when I'm active. My doctor isn't overly concerned but keeps telling me I need to take it easy. I'm not supposed to be picking up Asher anymore, which is hard at times but I know I need to listen to my doctor.

I still think I'm sleeping better this pregnancy than I did when I was pregnant with Asher. I have to get up several times a night but I'm able to fall back asleep pretty easily thanks to my glorious pregnancy pillow (that Josh jokingly refers to as my boyfriend.) I am still having the bizarre, vivid dreams that I always have when I'm pregnant.

We moved Asher into his new room this weekend and it went SO well! We had been nervous about how he would adjust and we tried to make it as fun and exciting for him as possible. We presented him with his new rocking chair, which was a birthday gift from his great-grandma Jackie. I'm happy to report that he has been sleeping through the night in his new room all week. I'm starting to think I was the one waking him up at night with my frequent bathroom trips. Overall, I'm happy it went so well! Hopefully Asher doesn't get possessive over his old room when he realizes that the babies will be occupying it in the coming months. The "mine" phase is a struggle.

Josh has been working hard at getting the baby room painted and I'm so excited to start decorating! After approximately 20 paint samples, we decided on a pale gray/blue and it looks so good on the walls. I think the white cribs and changing table will really pop against the color. My to do list includes deciding on a rug for the space, as well as crib bedding.

I'm also looking forward to my appointment tomorrow! I have an ultrasound to measure the babies' growth. One of the twins was measuring slightly smaller at my last ultrasound at 19 weeks, so I'm anxious to see how they are doing. I can't wait to see them wiggling all around on the screen!