How is it even possible that my sweet babies are already eleven months old? Other twin moms are always stopping me to tell me just how fast time flies with two babies and looking back on this last year, I really can't believe how quickly it all went. 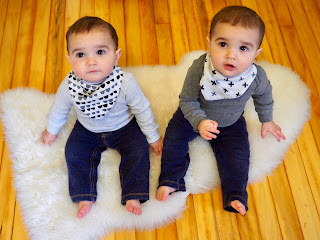 You know when you go on a fun vacation and you pack your days so full that looking back it feels like it flew by? That's how life with twins feels all the time. 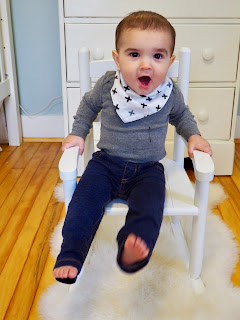 Silas is such a sweetheart. He has a deep, belly laugh and he seems to think pretty much everything is funny. He is more timid than Ezra, at times wary of strangers or new things. He needs more hugs and cuddles for reassurance throughout the day than Ezra does and he is happiest when he is sitting on my lap or being worn. He loves to read books and also has developed a fondness for eating them. Silas has experimenting with his emotions and has the funniest fake cry that he has been playing around with lately. 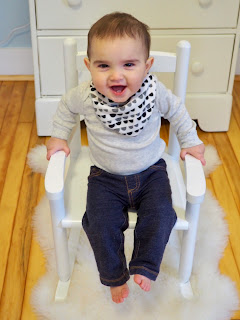 Ezra is more independent than Silas. He seems to enjoy playing by himself and testing his boundaries. He hardly ever sits still and is always climbing everything. He likes to read books but can really only focus for one before he is off exploring again. He squeals when he laughs, and has a mischievous little smile and the most adorable "scrunch face" when he wants your attention. He enjoys carrying various things in his mouth like a dog, especially his stuffed bunnies, which is always making us laugh. 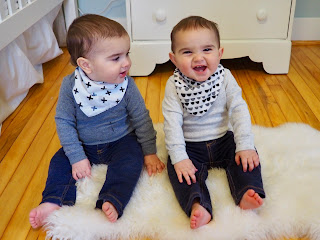 While they took their first steps at nine months, Silas and Ezra made the switch to fully walking just before eleven months. They are experimenting with sounds and saying new things regularly. Silas recently started saying, "all done," and Ezra now says, "okay." They also seem to have developed their own language that just the two of them understand. 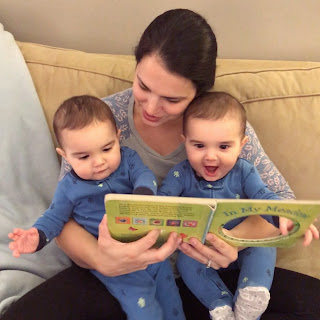 This is a tough one because overall, we feel so fortunate that we have such strong babies who are meeting all of their milestones. Due to their asthma medications, we have experienced some challenges in terms of growth over the last six months. Long story short, the steroids that were helping them breathe were majorly stunting their growth. We recently began weaning them off their asthma medications and are hopeful that we can survive the winter (and all the viruses that come along with it) without any major respiratory issues. This has all been a huge source of stress for both Josh and I, but we are taking it one day at a time. 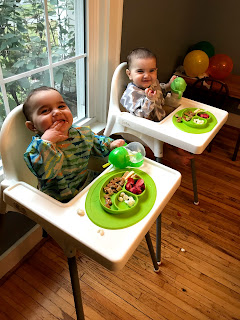 My boys all love to eat. They are still nursing about five times during the day and several times throughout the night along with eating breakfast, lunch, and dinner. Sometimes a snack is thrown in as well, depending on the day. They eat everything that the rest of the family does (with the exception of honey) and their recent favorites include spinach and mushroom quiche, bagels with cream cheese, macaroni and cheese, and broccoli. Mealtime is incredibly messy and usually results in a bath, but it's hard to mind at all because Silas and Ezra enjoy eating so much. 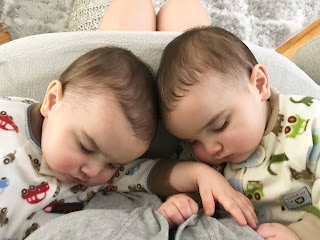 Nap time is continuing to go well and in the last few weeks we have even switched to naps in their cribs. Sometimes I put them down one at a time but lately they have wanted to tandem nurse at nap time. If they don't fall asleep while doing that, I'll put them in their cribs awake and they put themselves to sleep. They usually take a two hour morning nap and then a shorter 45-60 minute afternoon nap but several times lately they have taken just one three hour nap. I'm wondering if they might be starting to transition to one nap a day, though they seem really young to be doing this.

Night time is tougher but they aren't currently cutting any teeth so it's been a little bit better. Silas is a better sleeper than Ezra (usually only waking 1-2 times to nurse versus Ezra's 3-4 wakings throughout the night.) I still have no plans to night wean due to their health issues. 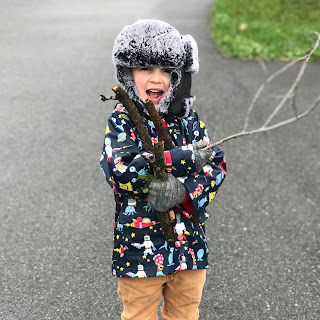 Asher is currently transitioning to doing full days at his preschool and he seems to really be loving his time there. It gives him a space where he can explore, learn, and play with his friends, providing the structure that he lacks in our loving but at times chaotic household. He continues to be the best big brother, so patient and gentle even when his brothers are always crawling all over everything, knocking over his toys, and pulling his hair. When he walks into the door after school, the first thing Asher does is give his brothers a big hug and kiss and it melts my heart every single time. 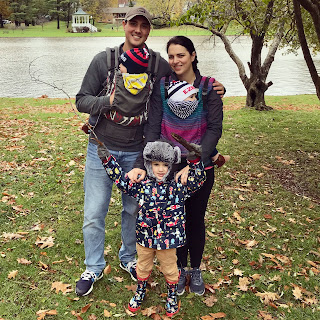 The holidays are approaching, along with the twins' first birthday, and I am so looking forward to slowing down and spending time with family and friends creating new memories and traditions.