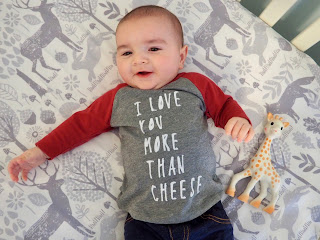 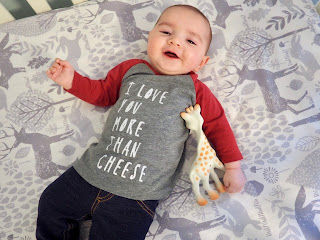 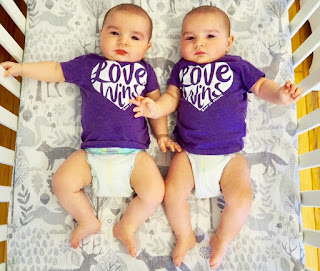 Both Silas and Ezra are reaching and grasping onto things. They are lifting their heads better every day and pushing themselves up onto their chests during tummy time. They are much more socially engaged and are always watching everything that is happening around them. Both of them, but especially Ezra, want to spend most of their time standing up (with help of course.) They are close to rolling from belly to back but haven't begun doing it on their own yet. 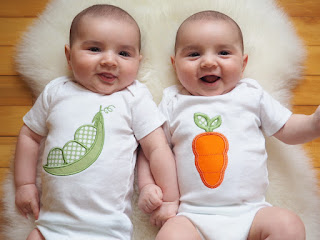 The last month has been tough in terms of illnesses. Shortly after our trip to Vermont in early March, Silas and Ezra came down with a virus. Our pediatrician had noted previously that Silas and Ezra had developed a rattly cough and wheeze when they were sick, which we originally thought was RSV but tests indicated otherwise. When they got sick again in March, along with ear infections, the cough and wheezing were back and worse than ever. They pretty much spent the entire month of March sick and the respiratory problems just wouldn't go away. Many doctors office visits, nebulizer treatments, and medications later, we have discovered that Silas and Ezra have what they call "reactive airways" which will most likely later be officially classified as asthma when they're older. Doctors still aren't sure of the severity of asthma we may be looking at, so hopefully our upcoming appointments with the pulmonary specialist can give us some answers. 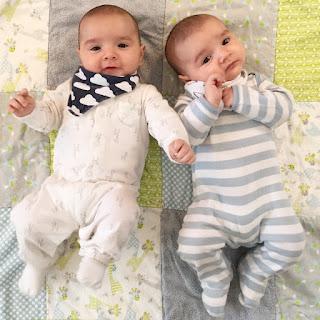 Prior to getting sick, Silas and Ezra were great sleepers, either sleeping through the night or waking up just once to nurse. Their constant illnesses have messed with their sleep patterns to the point where it's completely unpredictable how many times they will wake up at night. Most nights, they are waking up twice between 7pm - 6am. They wake up earlier these days; usually around 6:30am but we've noticed that if they wake up anytime after 5am, they are ready to party. We never realized how lucky we were when Asher was a baby. He used to sleep until 8am every day! 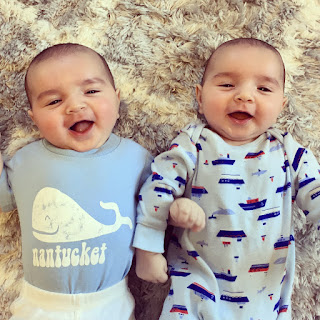 We are still swaddling them when they go to sleep but we know these days are numbered. Asher started rolling over much earlier than his baby brothers, so we stopped swaddling him around 2-3 months old. A few weeks ago, we tried transitioning them to the Magic Merlin Sleep Suits I have read so many rave reviews about but it didn't go well at all. Hopefully we can try them again before they outgrow them because they seem to really need the snug feeling that the swaddle provides them with. We were able to transition Asher pretty seamlessly from swaddles to sleep sacks; I guess we never realized what an easy baby he was! 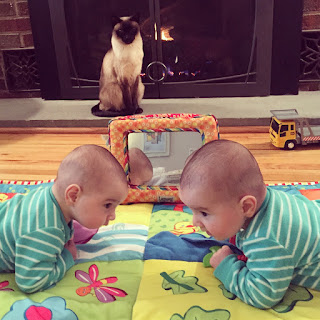 Silas and Ezra are still exclusively breastfeeding but it has been more stressful in the last month because when they are sick, they are not nursing nearly as much. Whenever baby Asher got sick, he always nursed more but these guys are the total opposite. Feeding two babies is a lot of work as it is so worrying about them getting enough to eat on top of everything else has been making me anxious. Their pediatrician keeps assuring me that they are growing well despite everything they have been through but I can't help but worry. 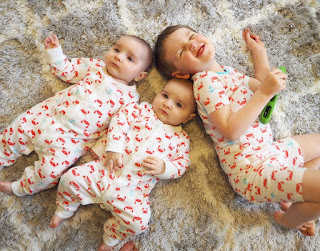 Asher continues to be the sweetest big brother to Silas and Ezra. He is so happy to wake up in the morning to his baby brothers. Asher mimics the way that Josh and I treat the babies, talking to them, giving them hugs and kisses, and comforting them when they cry. He loves that they are starting to play with toys because he can interact with them in new ways. He is protective of them when we go out in public and is so incredibly patient and well behaved through all of their endless doctors appointments. 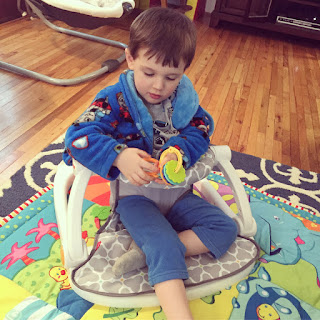 My heart just melts when I see Asher with his baby brothers. Josh and I were just talking about how one of the best parts of being a parent to three boys is seeing Asher really come into his role as a big brother. We are so proud of the kind, thoughtful, gentle boy that he is becoming. 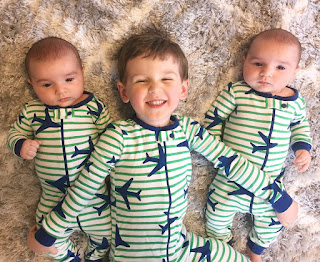 The first few months with infant twins was hard so hard and made us feel like brand new parents all over again. When we look back on December through February, it's a bit blurry - endless diaper changes, hours upon hours of cluster feeding, and the dreaded daily "witching hour." At four months old, things are finally becoming calmer, more routine, and more (dare I say?) fun. As hard as it is at times, and trust me life with twin babies and a toddler is never easy, life is so, so good.