I feel like I just wrote Silas and Ezra's two month update and here I am again. Three months old! I always have the goal of blogging more often than I do now and I think it will get easier as the boys get older. It's hard to have time for anything these days, even a shower or a trip to the grocery store. 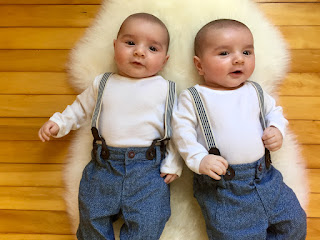 Three months is such a fun age because they are really starting to become their own little people. Ezra continues to be more laid back than his brother. He is also much more physically motivated than Silas. He loves doing his "exercises" where he holds my hands and goes from lying down, to sitting up, to standing. He gets so excited when he is finally standing, with wide eyes and a huge smile on his face. Ezra needs to be held more often than Silas does and prefers sitting up, looking around at things to lying on the play mat. Ezra is less content in a swing and needs to be worn more frequently. 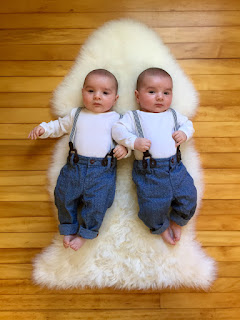 Silas is a little social butterfly baby. He loves to make eye contact and gets a big smile whenever you look directly at him. He is always cooing at me and loves when I mimic his talking sounds. He has become a little distracted nursing because he often wants to interact with me rather than eat, which is just so adorable. Silas is definitely more demanding than Ezra. I always read than twin babies are patient because they have to be, but this is certainly not the case for Silas. He's been perfecting an incredibly loud, shrill scream to express to me his immediate need for milk. 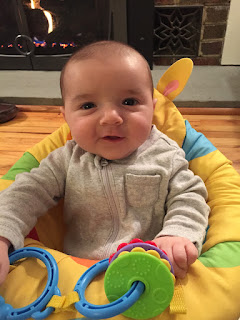 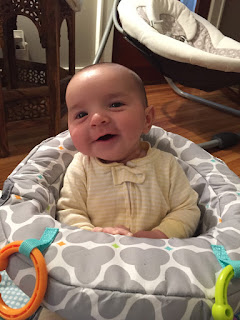 It's amazing how much they Silas and Ezra changed in the last month. They are so much more social: smiling all the time, cooing, and even giving us tiny giggles. They are constantly watching everything we do. When Asher is playing near us, they will strain their little necks to try and see what he is doing. They recently discovered each other's presence, mostly while nursing. They will stop what they are doing and look at each other and start cooing and smiling. It is unbelievably cute. They also have begun reaching for and grasping onto toys while playing on their play mat. They are holding their heads up better every day and are getting so strong. 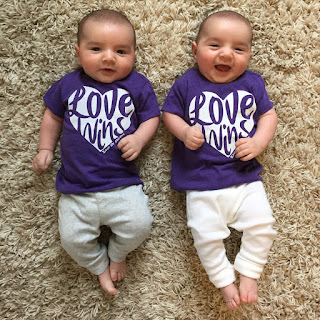 All three of us battled thrush thanks to the antibiotics the boys were on that I mentioned in their two month update. I normally take a probiotic and give them one as well to prevent thrush but when we were in the hospital, I forgot to bring these. I had no idea how hard it would be to get rid of thrush while nursing twins. Other than that, we have all been healthy, thankfully. With spring around the corner, I feel hopeful that we can be healthier in the coming months. 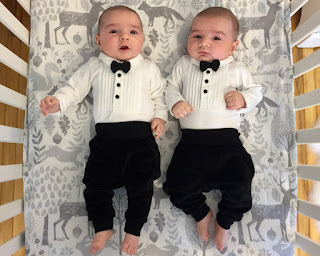 Silas and Ezra are such good sleepers. We dress them in pajamas and swaddle them before they have their last breastfeeding session of the day around 6:30/7pm. Then they nurse for a long time, anywhere from 45 to 75 minutes. Usually Silas falls asleep first and then Ezra continues to nurse for a while longer. Once they are both asleep, Josh and I transfer them to the pack and play where they sleep. They sleep soundly until somewhere between 3/4:30am, wake to nurse for 15-20 minutes, and then go back to sleep until about 6:30am. Three times in the last month, they slept right through their early morning nursing session! (Which, for those keeping track, is three more times than Asher slept through the night in the last month. But that's another story entirely.) 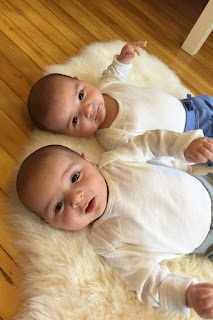 It's hard to say whether they will continue to sleep this well, as only time will tell. There is usually a big growth spurt around three months and then typical sleep regression around four months. Maybe, just maybe, these boys will be better sleepers than their big brother? Fingers crossed.

Silas and Ezra nurse almost exclusively with an occasional bottle (maybe two times a week) from Josh. I would happily pump and give bottles more regularly in the evenings but usually we are so busy during that time that I just end up nursing them because it's easier. They are still all over the place with breastfeeding and I continue to just do it on demand. According to my app, they are averaging about eight nursing sessions in a 24 hour period but it really depends on the day. Sometimes they are hungry an hour after they last ate and other times they will take a long nap and go 3+ hours. They seem to be gaining weight well and have good diaper output, so although I haven't had them weighed in a couple weeks, I think it's safe to say that breastfeeding is still going very well. 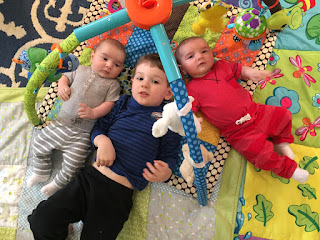 Asher seems to really be enjoying his role as big brother. He usually wakes up after we do and gets the biggest smile when he sees "his babies," despite how grumpy he may have been just the moment before. He wants to be a part of everything they do, to the point where he tries to crawl up onto the breastfeeding pillow while I am feeding his brothers. He gets excited when he sees that Silas and Ezra are getting bigger because soon they will be able to "play toys" and "wrestle." I can only imagine the fun that is going to ensue with these three.

Although I am sad that the newborn phase is over, this also means that things are finally getting a bit easier for us. That, or we getting better at being parents of twin infants and a toddler. Silas and Ezra are starting to naturally develop a (somewhat) more predictable eating and napping schedule, which means that I can finally have more time to get things done around the house and play with Asher one on one. 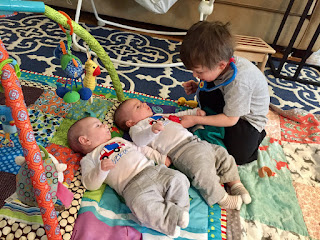 As crazy and chaotic as things get around here sometimes (if you've ever been here around 5pm, you know exactly what I'm talking about), I still wouldn't change it for the world. A little over a year ago, we were trying to wrap our heads around having two babies and now I can't imagine my life any other way.